What’s a Budget for Expat Living in Thailand?

Here’s an example of a most recent handyman bill and the story behind it: 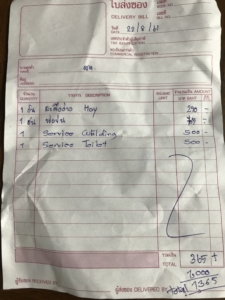 The mounting of my sliding carport gate came adrift and needed three welds and my guest bedroom sink was leaking water because its drain and stopper had never been correctly installed and needed replacing.

Our Concierge tech team, two guys, showed up unannounced (everyone in Thailand shows up unannounced) welded the gate and took the sink away. They returned it with a handsome new chrome drain and stopper correctly installed and hooked it up to the plumbing and the problems were solved. Then they handed me the bill, which I read as 7,365 baht (US$225) fair, thought, for such repairs, especially since it included better quality plumbing hardware than the original. I handed the guys 8,000 baht and was about to tell them to keep the change when they burst out laughing and pointed to the numeral I had read was ‘7’. It’s the locals’ way of writing ‘1’.

Typical Expat Monthly Budgets. Our most recent survey shows that twenty-three percent of expats in Thailand have monthly budgets of 25K-45K baht a month. Forty-eight percent have budgets over 65k baht and ten percent with over 145K baht to spend.

When I wanted to create a Budget for Living in Thailand in 2018 I turned to an expert on Thai budgeting, Nancy Lindley. With years of bookkeeping experience, she makes personal budgets and also keeps to them. Better still, she keeps careful note of unexpected expenses and keeps her finger on the pulse of Thailand’s cost of living. Happily, a cost of living budget in Thailand is pretty easy to figure out. It’s been predictable since the Asian Financial Crisis (you’ve probably forgotten; Thais haven’t).

Significantly, Nancy has a second calling: she cares for expatriates who fall on hard times. She visits them in hospital, contacts their relatives, talks to the consulate and spends countless hours repatriating very sick people who cannot afford long-term or major medical care in Thailand and must go home for treatment. She has seen a side of expatriate life that few of us even think about, so my Thai budgeting conversations with her are always sobering.

I asked Nancy to draw up two budgets for living in Thailand , one for the average Thai and one for five times the average Thai’s cost of living budget, and to comment on each. I’ve added my own comments after hers. Both budgets are for living in Chiang Mai (learn more). For Bangkok add 15%; for the countryside subtract 15%. These figures are current as of 2014. E-mail me, [email protected] if you have questions. I lived on this budget for 12 months:

Nancy’s Comments on the $600 Budget for living in Thailand: “I’ve seen single people lead nice, pleasant lives on this budget. Here’s how they do it”:

Cost of Living in Thailand Examples:

Medical: Two farang friends have just delivered babies – girls – in Chiang Mai hospitals. Each had a private room, one for four days. Their total was pre-agreed: 60,000 Bt (US$1700) each. Both were delighted by the care they received which, in one case, included an autographed photo of the entire delivery team gathered around the bed of the exhausted mother holding her baby for the first time. Another friend got bad food poisoning and went to the hospital. She needed intensive care but every bed in the hospital was full, so the doctor, not wanting to put her back in an ambulance, had his desk removed from his office and a bed installed for her. The bill next day was 1400 Bt (US$40). When she protested that this was too low, staff told her it was because she did  not have a ‘proper room’. A nurse called her at home that night to check her progress.
Automotive: I’ve been doing a lot of fast driving through mountainous roads lately and can assure you that even remote roads are well maintained in the Kingdom. But taking thousands of curves stresses wheel bearings, apparently, because one of mine went out. I discovered this when I went to have the Toyota’s front alignment checked after I hit a pothole (in the middle of town!) and the steering went weird. The shop fixed the affected wheel and moved it to the rear, then balanced and aligned the front wheels. They refused payment because I’d bought the Michelins (3000 Bt each) from them and the work was covered by their lifetime warranty – a pleasant  surprise. There was no denying the wheel bearing problem (the grinding noise was obvious once they pointe it out) so the next day they came and picked up the car. It was back a few hours later along with a bill for 2,000 Bt. and the old bearing in the factory box that held the new bearing. Don’t worry too much about the cost of owning a car in Chiang Mai: it’s far less than you’re accustomed to at home.

Rick, Who Lives on $600 Budget in Thailand

Nancy’s Comments on the $2,400 Budget for Thailand

There is much more room to play with this budget. In it I assume:

My Observations and Nancy’s Responses

Budget for Living in Thailand Costs vs. Scooter Danger

When I shared my observations about scooters with Nancy her response was, as usual, grounded in a reality that I’ve never experienced. Here’s what she said: “I stand by my original observation the elderly shouldn’t use motor scooters. It isn’t a matter of “if” they’ll have an accident, but rather “when” and “how bad”. Just come with me to the orthopedic wards at Suan Dok hospital to see what a motor scooter accident can do. These aren’t the guys with the head injuries – they’re in another part of the hospital”. See my web page on scooter dangers in Thailand.

Video: Budget for Living in Thailand

More about Thai Budgets and Cost of Living

So there’s food for thought for your budget for living in Thailand. Do you think you can make it?